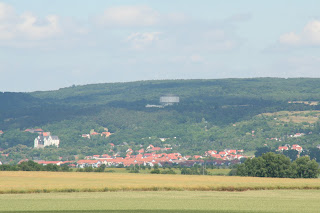 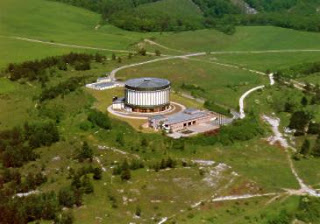 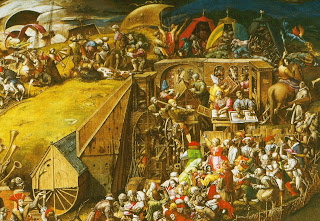 To my great horror, re-reading the section on Berlin in my Christian Travelers Guide to Germany (Grand Rapids. Zondervan, 2001), I discovered that there is no mention of the Soviet War Memorial in Treptower Park. This is a major oversight because the memorial ought to be one of the top ten sites that anyone visiting Berlin for more than a couple of days visits. Yet, like my own guide, most travel guides to Berlin make no mention of this major site.
Located by the Treptower Park S Bahn station it is set at the side of a major nineteenth century park that was originally intended for members of the working class. The memorial was built between 1946 and 1949 and contains the graves of 5,000 of Soviet soldiers who died in the final assault on Berlin.

How many Soviet troops actually died is a matter of speculation. At the very least it was over 81,000 and possibly as high as 150,000 with at around 300,000 Soviet casualties many of whom died of their wounds. At the end of the Battle over 450,000 German troops were dead and 479,298 taken prisoner. Many of these were marched off to Siberia never to return.
German civilian casualties were well over 100,000. After the surrender of German forces the Soviets went on a rampage of looting and rape that was encouraged by Stalin’s propaganda. In this situation no woman was safe yet these atrocities are conveniently left out of most accounts of the Second World War.
To their credit the Red Army quickly set up food kitchens and began restoring essential services for the civilian population. A month later, most Berliners were living on less than 1,240 calories a day and over a million were homeless.
No wonder the memorial is forgotten by many Germans. It is, however, an impressive site. Surprisingly, it also has a number of Christian iconic themes woven into it.
More to follow …
Posted by Christian Reviews at 10:57 AM No comments:

Until the film Valkurie (http://valkyrie.unitedartists.com/) came out in 2008 the general impression in North America was that all Germans were Nazis during the 1920’s and 1930’s. Actually, there were strong resistance movements that are largely overlooked by popular writers and historians. At present the best book on these is Peter Hoffmann’s The History of the German Resistance, 1933-1945 (Montreal and Kingston, McGill-Queen’s University Press, 1996).
Anyone who spends more than a couple of days in Berlin, during which they see the main sights, ought to visit the Gedenkstätte Deutscher Widerstand, or German Resistance Museum, which contains a wealth of information about this little known episode in German history. Surprising to many is the prominent role of both Christians and Communists in resisting Hitler and Nazi tyranny. The exhibit also includes a highly detailed record of the ill-fated July 20, 1944, plot to overthrow Hitler. Here again the presence of Christians among those executed is noticeable.


After getting an overview of the resistance a visit to the Plötzensee Prison Memorial, on the borders of Charlottenburg and Wedding, which can be reached by going to the Gedenkstätte Plötzensee S Bahn station, is where over 2,500 German political prisoners were executed between January and April 1945. Many of these people were Christians who were literally hung on huge meat hooks where they slowly bled or strangled to death.


The nearby Church of Mary Queen of the Martyrs, or Kirche Maria Regina Martyrum, was designed by Hans Scäde as a memorial to victims of Nazi oppression. It is entered through a courtyard representing the parade ground in a concentration camp, which symbolizes pain and suffering. The crypt is deliberately gloomy, but the upper church is illuminated by a gentle, natural light, and contains a large modern fresco by Georg Meistermann depicting the transformation of darkness into light, night to day, evil to goodness, through the redemption of Christ. Note the 14th-century Madonna in the church and the modern sculpture “The Woman of the Apocalypse” by F. König in the courtyard. Overall this church makes a deep impact on its visitors reminding them of the great suffering of Jews and Christians during the Nazi era.


After visiting these sites a trip to the notorious Sachsenhausen concentration camp in Oranienburg, at the end of the south S-Bahn line, is appropriate. Here you can see the conditions under which political prisoners lived, including the cell of the famed theologian Martin Niemöller (1892-1984), who was held there “at Hitler’s pleasure” for his bold criticisms of Nazism. It is also important to realize that, after 1945, Sachsenhausen became an equally brutal Soviet prison under Communist control. The full story of the Communist use of former concentration camps, where thousands of people died, many of whom were not Nazis at all, has yet to be told.
Posted by Christian Reviews at 10:56 PM No comments:

I posted thought I had published this blog last week, but somehow it went to the Christian Book Reviews Blog - can I blame Microsoft Gremlins? Anyway here it is where it is supposed to be:


Although to anyone who has never visited Berlin the idea of a “Jewish Berlin,” may sound absurd, Judaism is actually an important and vibrant tradition that the Nazis failed to eradicate. Perhaps the best place to start a tour of Jewish Berlin is with a visit to the well designed Jewish Museum opened in September 2001 and designed by the American architect Daniel Libeskind (b. 1946). This is a masterpiece of design that captures the tragedy of the Holocaust while preserving a sense of both history and hope. More information can be found on the museum’s excellent website at:
http://www.jmberlin.de/main/EN/homepage-EN.php
Another place to visit is the Neue Synagogue (New Synagogue), Oranienburger Str. 30, near Museuminsel. It can be found on the web at:
http://www.cjudaicum.de/en
Completed in 1866, it was designed by the architects Eduard Knoblauch and Friedrich August Stüler (1800 – 1865) and built as an impressive example of Romantic architecture in Moorish style. Badly damaged in World War II, the church was reconstructed beginning in 1988. Attacked during Kristallnacht in 1938, the Synagogue was saved from destruction by the local police chief. A plaque on its outside wall remembers his courageous act. Today the New Synagogue is now the main center for Berlin’s Jewish community.
One of the fascinating things about Berlin is its well preserved cemeteries. The Jüdischer Friedhof (Jewish cemetery), Grosse Hamburger Strasse, founded in 1672 is the oldest in Berlin. It once contained the grave of the philosopher Moses Mendelssohn (1729-1786), the grandfather of the composer Felix Mendelssohn-Bartholdy (1809-1847). Felix Mendelssohn-Bartholdy’s conversion to Christianity is commemorated in his great oratorio Paulus (St. Paul).
The graveyard was desecrated by the Gestapo in 1942. Now all you can see is a memorial plaque, a bronze sculpture by Will Lambert dedicated to the 55,000 Berlin Jews who were deported to camps in the East, and a gravestone commemorating Moses Mendelssohn who was on of the greatest Jewish philosophers of all time.
The Jüdischer Friedhof (Jewish Cemetery), Senefelderplatz, Pankow, fared better than most. It contains the graves of the composer Giacomo Meyerbeer (1791 – 1864), the historian Richard Moritz Meyer (1860-1914), and the painter Max Liebermann (1847-1935).
Posted by Christian Reviews at 10:50 PM No comments: